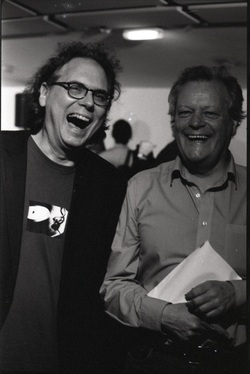 Jeff Hilson and me at the Rich Mix in 2012, following the reading of our collaboration 'Honda Hands'. Photo courtesy of Alexander Kell.
Thoughts on Collaboration

Before I list the many collaborative ventures I've been involved with I want to point out a strand of posts on my blog that attempts to anatomise the practice of collaboration, and literary collaboration in particular, here.  These posts were in preparation for an essay on 'Literary Collaboration', which will be appearing late 2021.

Between 1979 and 1981 in Norwich I collaborated with Peter F. Stacey and a young Stevie Wishart in The Ship’s Orchestra, a new music-poetry unit that varied in size from duos to orchestra. (We also sang folk music together). We performed collaborations as well as pieces by John Cage and Christopher Fox.

Largely under the publishing tag Ship of Fools, Patricia Farrell and I have published many booklets of our image-text collaborations, beginning with Mesopotamia in 1987, and continuing to today. (See Publications page for a listing.) A page from Fucking Time, London, 1994 is displayed at the bottom of this page. Ship of Fools had an exhibition of its works at Edge Hill University in 2017 and here is a link to some photos of that. We've not often worked on textual collaborations, but here's one from April 2019, our versions of Marlowe and Raleigh's 'Shepherd' 'collaboration'.

A number of pieces in and around Twentieth Century Blues were either developed or written especially for dance, movement and music performances, in collaboration with dancer and choreographer Jo Blowers, particularly poems from the ‘For Jo Blowers’ strand of that work.

As can be seen from Blues 63, which includes partial descriptions of two performances, I considered making these themselves part of the numbering. Performance details are incomplete but include, both full-scale presentations that sometimes did not involve me (marked below ‘No RS’) and also ‘chamber-style’ improvisations consisting of the two of us.

27 May 1993: ‘Shutters’ (‘a movement based mixed-media work performed by six women. It includes voice, sound projections, steam and pyrotechnical images. It is about women, and the forms which have arisen out of the process of its making are both lyrical and violent’ (JB)). Performers: Polly Hudson, Josephine Liesk, Tracey West, Eava-Mama Mutka, Fernada Amaral, Lisa Harley. Photography: Aeden Kelly. Nosepaint at Woodwork, Vauxhall Spring Gardens, London. No RS.

18 February 1994: ‘Weightless Witnesses’/‘Killing Boxes’, ‘Some of the piece is structured, but most is improvised. There are other sections, not shown this evening, that involve more voices and an installation with pyrotechnical images’. (JB). RS (Text and performance), Music by Gus Garside (bass and electronics), Movement: Jo Blowers and Tracey West. Directed by Jo Blowers, Chisenhale Dance Space, London.

Both ‘Weightless Witnesses/Killing Boxes’ and ‘Shutters’ received full scale productions during the Arts Festivals at Brooklands College, Weybridge, Surrey, at least in 1993 and 1994; this is what I describe in Blues 63 (below).

1 May 1994: ‘Schräge Musik’, Live Art at The Café Gallery, Southwark Park, London. Lol Coxhill was on the same bill.

14 November 1995: ‘Shutters’, and ‘Weightless Witnesses’. Ship of Fools at the Falkland Arms, London. Combined with launch of The Book of British Soil (with Patricia Farrell).

Reading while Jo improvised at Edge Hill last year, a surprise visit. Ventriloquial deletions. I’d forgotten that it was agreed that Jo would speak part of the text, and I was slightly wrong-footed when I heard her quote, ‘He’s my commanding view,’ and I realised that Jo’s suspicion that she had been working for months with drafts of the poem was correct, since that line was no longer in the text, but was again for the text of its realisation: ‘Entries, Empty Diary 1996[’]

6 May 2013: 'Excitation for Jo Blowers', a public rehearsal in the Occupy Room of the Bluecoat, Liverpool, with Patricia Farrell as second voice.

Twice in the autumn of 2014 Jo Blowers, Steve Boyland and I performed a three voice piece (a text from A Translated Man treated) at 8 Water Street and Storm and Golden Sky. See photos and details here.

On February 3rd 2016 Jo Blowers (with others) read 'Shutters' as part of the prelude to Inhabit, a three year dance project. (See here.)

First there was Codes and Diodes (Writers Forum 1991), a processual piece using the text and left-overs from my poetic introduction to Processual.

Then, a year before Cobbing’s death, there was Blatent Blather/ Virulent Whoops, a text written between Juky and October 2001, whose text may be read here. A video of Patricia Farrell and I reading a revival of the text at The Other Room may be visible soon on The Other Room website.

Both of these works have been re-published (2021) in a box, along with an essay by myself, by Veer, here: Bob Cobbing - Robert Sheppard - Collaborations - Veer Books.

With the Liverpool painter and print-maker (see his site here) I have been making prints which have been exhibited in the Poetry Library, Edinburgh and the National Gallery, Edinburgh (as part of the AHRC project Text Beyond Poetry, and at Kuntstraum Dreizwanzig in Cologne in Pete’s solo show. One of our prints, 'Twisted Scree' is displayed near the bottom of this page. It was runner-up for the 2013 Adrian Henri Prize. In April 2013 we mounted an exhibition, Manifest, at Edge Hill University. Details here.

In 2015 Pete produced these new prints. Here. In 2018 we embarked on a new collaboration concerning architecture in Liverpool. This coincided with Pete being shortlisted for the John Moores Prize. Some of the new images/words may be seen here. I used one for the cover of Micro Event Space in which my accompanying poem appears.

Here are more recent pieces on his work and on our collaborations.

I collaborated with my old university friend of more than 40 years, Trev Eales, who is a photographer specialising in photographs of performers at rock concerts. We are to salvage something from this project, or build a new one, in the near future.

Largely through the generous offices of David Annwn I have been working with the American calligrapher Thomas Ingmire, whose work may be seen here.

See our 2018 collaboration 'Synovial Joints', part of his recent exhibition 'Visual Poetry: A Lyrical Twist' at the San Francisco Public Library. And watch his video that features this poem and others: Here.

Working very fast Jeff Hilson and I wrote ‘Honda Hands’ for the 2012 Rich Mix Collaboration. The performance may be seen and heard (and even believed) here.

Liverpool Hugs and Kisses (published in 2015). See here for details.

Zoe and I brought to life one of the creatures of René Van Valckenborch’s European Union of Imaginary Authors, the Cypriot poet Gurkan Arnavut. Here is Zoe reading the poems. (I was ill the night of the reading.) The poems kickstarted the EUOIA project that resulted in the collaborative volume Twiiters for a Lark (see below).

With Dozens of others of the EUOIA

First, here you can read our texts in their intertwinedness, on 3am Magazine. These two improvisational texts were written simultaneously between the hours of 19.00-20.00 on Monday 23rd January 2017, one in Liverpool, the other in Barnsley.

Below this list you can watch the brief video of Ian McMillan and Robert Sheppard reading their simultaneous writing in simultaneous rendition at the Leeds North by North West in early 2017.

As part of the European Poetry Festival, in April 2018, I was paired with the Lithuanian poet (and translator) Rimas Uzgiris. We wrote one poem for the event in Manchester, and an account of the event, more on Rimas, and a video of our short poem, see here.

As part of the post-lockdown European Poetry Festival September 2021 in Manchester, Joanne and I performed an untitled text. HERE.  Of course, we had already collaborated as part of the EUOIA. 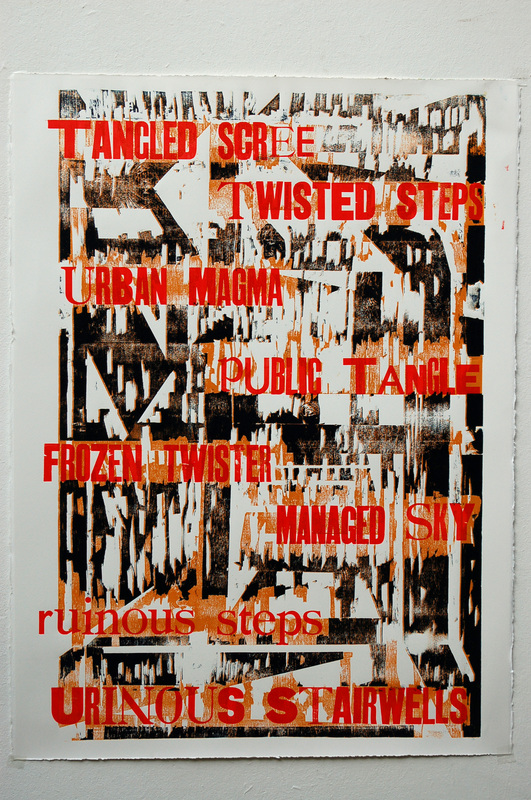 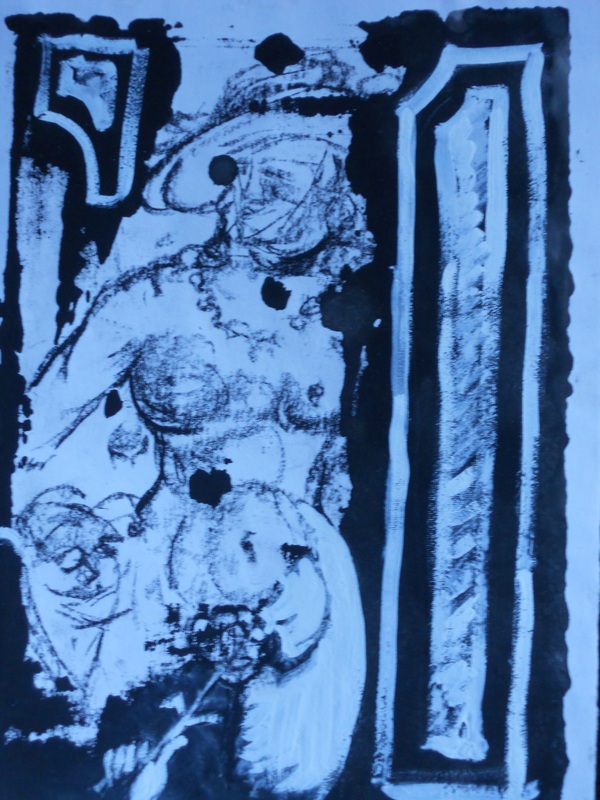